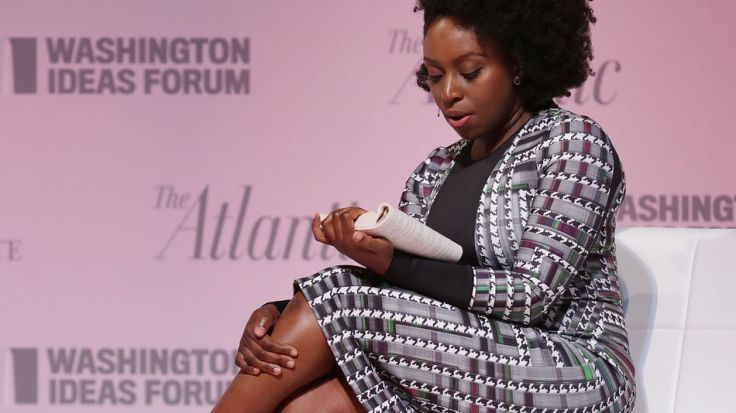 Chimamanda has been on the news. She has come to stay people! And every feature of her; from Vogue to the Dutch magazine has been a hit – “Back to Back”

1) She granted an interview to a Dutch magazine stating clearly that Beyonce’s feminism wasn’t her type of feminism. ( http://www.volkskrant.nl/boeken/ngozi-adichie-beyonce-s-feminism-isn-t-my-feminism~a4390684/)

2) The Feminist Manifesto (which I posted here on my blog)

4) Her “thank you” note to US First Lady Michelle Obama for The New York Times T Magazine cover feature. Adichie is indeed an influential woman.( http://mobile.nytimes.com/2016/10/17/t-magazine/michelle-obama-chimamanda-ngozi-adichie-gloria-steinem-letter.html?mwrsm=Facebook&_r=0&referer=)

5) Her celebrated TED talk “We should all be feminists” was featured on T-shirts in Maria Grazia Chiuri’s debut Dior show earlier this month. Said TED talk has received millions of views across the world.

6) And now she has become the face of Boots No7 make-up, with her debut campaign launching on today.

InVogue’s November 2016 Real Issue, in “The New Face Of Beauty: You”, she said of the campaign:

“I think much of beauty advertising relies on a false premise – that women need to be treated in an infantile way, given a ‘fantasy’ to aspire to… Real women are already inspired by other real women, so perhaps beauty advertising needs to get on board.”

The campaign launches on television, online, in print and in outdoor media today, October 21, with Adichie speaking about how she used to fear being taken less seriously because of her love of make-up, but later came to embrace it as a tool, an enhancement and as part of her own identity.

“I like makeup. I can intellectualise it and say that it’s also partly the idea that I refuse to accept that somehow feminism and femininity are mutually exclusive,” the author said in a recent public address.

Ngozi Adichie believes that beauty can be part of one’s feminine identity and that using makeup as a tool to choose how she presents herself.

In September, she addressed a rapt audience at the Washington Ideas Forum saying;

As a feminist I find it very offensive that femininity means you can’t be taken seriously. I refuse that. I insist that women should have a choice to be as feminine as they like, as they want to be and still be taken seriously. You don’t have to wear oversize suits to be taken seriously. My suggestion perhaps is that men should try wearing high heels. I think it’s a good idea. High heels help you with your posture.

“I love makeup and its wonderful possibilities for temporary transformation. And I also love my face after I wash it all off. There is something exquisitely enjoyable about seeing yourself with a self-made new look,”
The novelist said in a statement emailed to Mashable.

We are proud of you! Keep crashing through glass ceilings and making paths for us!!! We are here cheering you on.

7 thoughts on “CHIMAMANDA THE FEMININE FEMINIST”